Why We LOVE Re-transfer Printing on plastic cards.

Home/Uncategorized/Why We LOVE Re-transfer Printing on plastic cards.
Previous Next

Why We LOVE Re-transfer Printing on plastic cards.

Retransfer printing (also known as “reverse transfer”) is quickly becoming the preferred method for printing ID cards. There are numerous advantages of upgrading to a printer with retransfer technology. Below are the 10 main reasons we LOVE  retransfer printers.

1) Outstanding Image Quality– If you need a crisp, clear image with vibrant colors, retransfer technology offers the best image quality in the card printer industry.  Initially, this technology was referred to as HIGH-DEFINITION since the image quality was such a dramatic difference than the direct-to-card

2) Over the Edge Printing– One limitation of the direct-to-card printing technology is the visible small white border (a 1/8” or less) around the entire edge of the card. 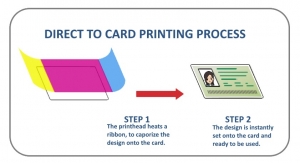 3) Lifetime Printhead Warranty – If you have replaced a printhead on your current direct-to-card printer, you know that they are not cheap.  ($500 and up!) One big incentive to look at purchasing a retransfer printer is you will never have that expense again – the Lifetime Warranty takes care of that.    Why Lifetime??  Since the image is printed directly onto the transfer film the printhead never makes contact with the actual card – thus it never comes in contact with the lint, debris or tiny burrs on a card. 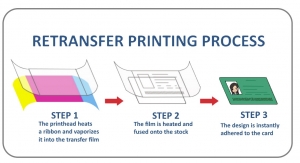 4) Flexible Card Types – Retransfer printers allow more flexibility to print on a wider variety of cards. This includes pre-punched cards, key tag cards, contact smart cards, or any type of technology card that has an antenna or circuit embedded in the card. In fact, retransfer printing is IDEA for any type of Technology Card and what we encourage if there is this need in a client’s Identity solution.

5) Increased Durability – With the color being printed onto the underside of the retransfer film instead of directly on the card, the image is protected by that clear film from direct contact with ID card holders, wallets, magnetic stripe or contact chip machines. The card keeps its original color and quality much longer than most direct-to-card prints.

6) Consistent Print Quality– Because the retransfer film that is being printed onto is a known and controlled substrate, print quality is more consistent than direct-to-card technology where the variable surface of the PVC card or slightly raised areas such as an embedded contact chip can all impact on print performance. This is particularly beneficial if you print proximity access cards or smart-cards, as there is often a slight “dimple” on the card surface where the internal electronic components are.

7) Designed for volume and long-life – The printhead used in a retransfer printer never comes in contact with the surface of the card, making it less likely to be damaged. With direct-to-card printers, the printhead makes contact with the ribbon lying directly on the card surface, thus exposed to dust and dirt on the card surface as well as possible burrs on the edges.

8) Ideal for Contact Chip Cards – This is because all the printing takes place between the printhead and the retransfer film and the film is then heat transferred to the card surface as a secondary process. When the film is transferred on to the surface of a smart card with an embedded chip – the film only adheres to the plastic areas of the card surface – ensuring that the chip area is always neatly cut out from the overall print.

9) Sharp Images and Graphics that Stand Out– Images printed with retransfer printers create sharper, glossier images (a result of the gloss finish of retransfer films) while the clear varnish overlay applied by direct-to-card printers results in more of a matte finish look.  Sometimes the gloss effect can cause images to look as though they have a greater depth or more definition.

10) Constantly Evolving – One of the biggest enhancements in retransfer printing is the addition of PIGMENT BASED INKS – enabling high-resolution printing and also allowing micro-text printing, which adds extra security. Pigment ink technology also resists fading and leeching in plastic badge holders.  Next is 600 DPI print resolution – tighter print resolution and fine line detail.  One of the latest is the ability to add a Tactile Impression – a security feature that allows a metal die with an image to be embossed into the heated lamination film.  A Tactile feature that cannot be reproduced, only enhancing the security of the card and your system.  This feature is unique to Entrust Datacard™ at this time.

About the Author: Charlia Pence

Charlia Pence is the President of Diamond Business Services and has over 30 years of experience in the industry.